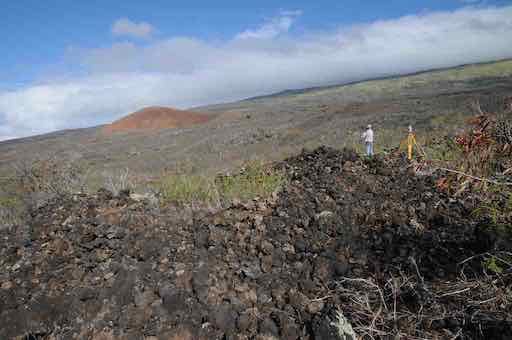 WF-AUW-176A, viewed from the ESE. Pu‘u Hōkūkano is prominent in the background, with Pu‘u Pimoe further down the ridgeline. (Photo by P. V. Kirch) 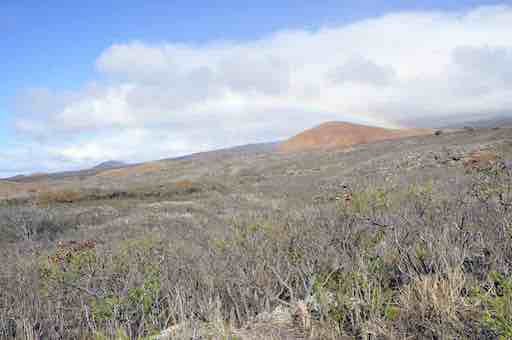 The horizon between the two cinder cones Pu‘u Pimoe and Pu‘u Hōkūkano as viewed from site WF-AUW-176A (compare the DTM-generated profile below). See pages 152–154 of the book for a commentary. (Photo by Clive Ruggles)

DTM-generated profile of the western horizon as seen from site WF–AUW–176A. The darker yellow lines indicate the setting paths of the sun at the December solstice (left) and June solstice (right); the lighter yellow line indicates the setting path of the sun at the equinoxes; and the blue line indicates the setting path of the Pleiades in AD 1600. The horizontal bars indicate the direction of orientation of the heiau walls to the W and N respectively. (Graphic by Andrew Smith; colour version of Figure 6.4 in the book) 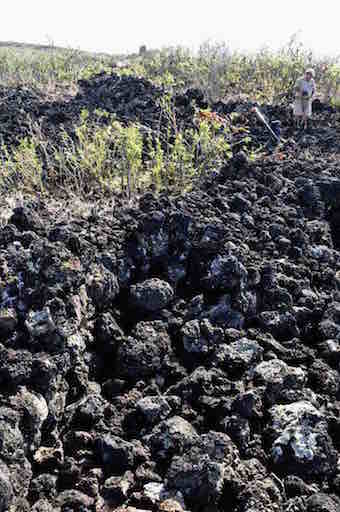 View eastward from the western side of the heiau, over the small elevated room, showing the lava outcrop on the nearby eastern horizon mentioned on pages 152 and 154 of the book. (Photo by Clive Ruggles)